Great start to 2020 – KCFRT in the news in January 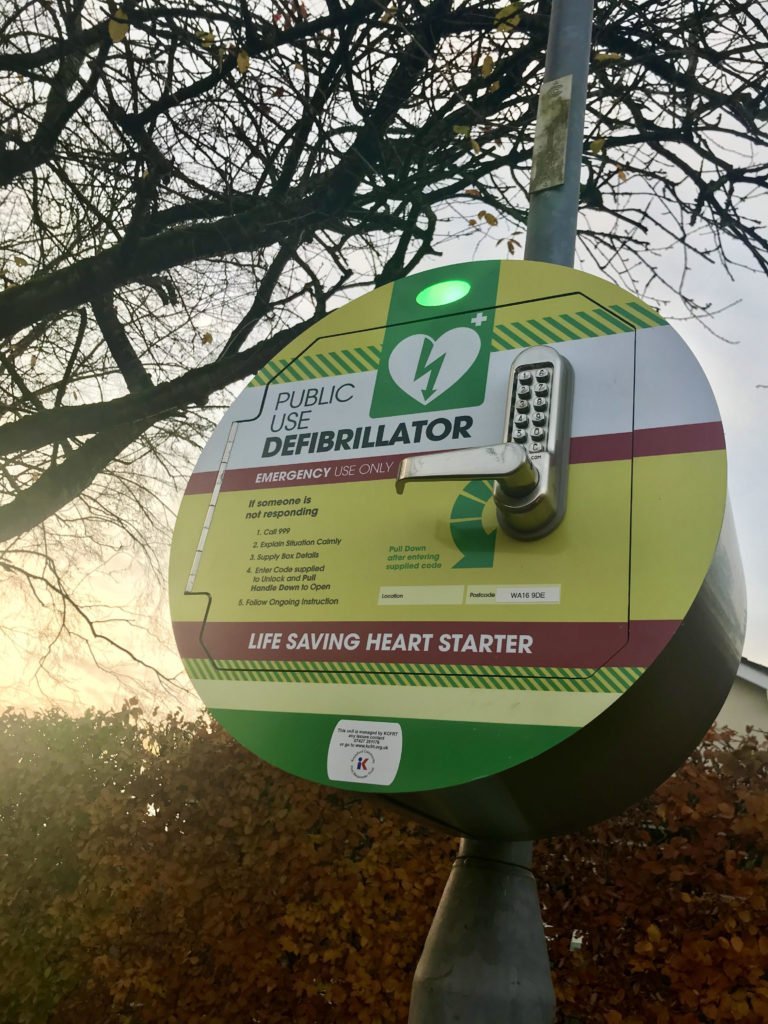 We are pleased to have been featured in the Knutsford Guardian twice already in 2020. In case you missed the articles you can find them here:

Hundreds to undergo cardiac screening in Knutsford in 2020

KNUTSFORD’S First Responders have achieved a first in Cheshire East with their latest life-saving initiative.

The equipment is believed to be the first lamppost-fixed cabinet to appear in Cheshire East.

“We crowdfunded around the Ashworth Park area, leafleting 150 houses, and 34 residents donated to fund the cabinet and AED,” said trust chairman Sal Thompson.

“I would also like to say a big thank you to Cheshire East highways, who converted the lamppost electrics to charge the unit and fitted the cabinet for us.

“We will be leafletting the area again in the next few weeks to encourage residents to attend our Heartstart course, to learn how to save a life, how to use an AED and how to make a difference when it matters most.”

Anyone wanting to attend a course can do so via Book A Course.

Hundreds of people to undergo cardiac screening in Knutsford in 2020

HUNDREDS of students, hockey players and members of the public are to undergo heart screening this year in Knutsford.

They are being held at Knutsford Academy and Knutsford Methodist Church, with one of the Academy sessions taking place in memory of father of two Mat Hodge.

Mat died suddenly in September 2018 from a cardiac arrest, aged 43, leaving his wife Georgina and sons Jamon and Jonty.

Mat was a member of Knutsford Hockey Club, and £14,000 was raised in his memory for a heart screening session for hockey players and KCFRT.

Some of the money provided a community defibrillator installed at Knutsford Academy next to the pitch where Knutsford Hockey Club play home games and where the club’s teams train. The defibrillator bears a plaque in Mat’s memory.

Hockey players raised £2,000 in memory of Mat by cycling 125 miles from Knutsford to Anglesey.

Eleven members of the third team at Knutsford Hockey Club completed the marathon challenge, which was organised to mark the first anniversary of Mat’s death.

The money raised was donated to KCFRT to support its work in the community.

Every week in the UK 12 young people die from an undiagnosed heart condition, and heart screening is a simple way to detect most cardiac abnormalities.

The cardiac screening days in Knutsford cost between £5,000 and £7,500 to stage, and provide screening for 100 people, which is undertaken by the charity Cardiac Risk in the Young for young people aged between 14 and 35.

The screening sessions in memory of Mat Hodge and for the public are being funded by KCFRT, and the session for Knutsford Academy student is being funded by a donation from Debbie Dixon.

The first screening session of 2020 is on March 31 at Knutsford Academy, and is for students.

The second is on April 25, also at the Academy, for members of Knutsford Hockey Club in memory of Mat Hodge, and the final one, for the public, is at Knutsford Methodist Church on September 26, between 8am and 5pm.

Thanks to Booths and Knutsford people for supporting us!

Cardiac Screening days and what they mean for our community